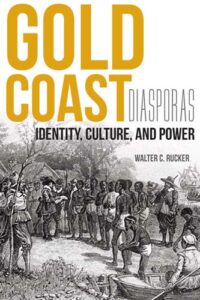 Although they came from distinct polities and peoples who spoke different languages, slaves from the African Gold Coast were collectively identified by Europeans as “Coromantee” or “Mina.” Why these ethnic labels were embraced and how they were utilized by enslaved Africans to develop new group identities is the subject of Walter C. Rucker’s absorbing study. Rucker examines the social and political factors that contributed to the creation of New World ethnic identities and assesses the ways displaced Gold Coast Africans used familiar ideas about power as a means of understanding, defining, and resisting oppression. He explains how performing Coromantee and Mina identity involved a common set of concerns and the creation of the ideological weapons necessary to resist the slaveocracy. These weapons included obeah powders, charms, and potions; the evolution of “peasant” consciousness and the ennoblement of common people; increasingly aggressive displays of masculinity; and the empowerment of women as leaders, spiritualists, and warriors, all of which marked sharp breaks or reformulations of patterns in their Gold Coast past.

“A work that probes deeply into the African background of a community of people in the African diaspora and shows how particular social and political conditions in their African place of origin influenced the ways in which they coped with and creatively responded to the harsh realities of slave life in the Americas. . . . The contention that new identities constructed in the America—like Coromantee—had real meaning for those who identified with those labels is important and timely. The strength of the work is its attention to the fluid and dynamic nature of culture and identity.” —Rebecca Shumway, College of Charleston

“Walter Rucker explores the origins and fates of one African regional group, known as Coromantees, in just the way that Afro-Atlantic history should be done, through careful study of the primary sources of the time in both Africa and the Americas. In so doing he has made a stellar contribution to the study of the way in which Africans and African culture was disseminated across the Atlantic.” —John Thornton, Boston University

“An impressive monograph highlighted by a prodigious body of original research spanning three continents. Gold Coast Diasporas reveals a deep engagement with the most important work in the field even as it pushes the historiography forward in wonderfully innovative ways. This book is both a call to action and a model for future research. His discussion of ‘commoner consciousness’ and ‘social resurrection’ will likely guide the way we discuss cultural identity in the African diaspora for years to come.” —Jason Young, Michigan

“[O]ne of the book’s greatest strengths is the ways in which Rucker painstakingly traces how ethnic labels were appropriated, recast, and ultimately employed as a means to establish community bonds and resist oppression. . . . Chapters that focus on the creation of the Gold Coast diaspora, religion, and women make for a captivating text that will be of interest to graduate students and specialist readers.” —Choice
“Provocative and well written, Gold Coast Diasporas is a must-read for any scholar interested in African identity, the transatlantic slave trade, and resistance. Africanists and African diaspora specialists need to engage with this book and with the methodological contributions that Rucker presents. His comprehensive approach to African identity and his rigorous analysis have produced a highly recommended study.” —American Historical Review 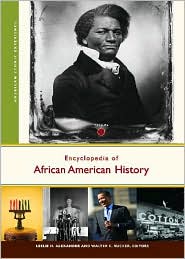 Encyclopedia of African American History introduces readers to the significant people, events, sociopolitical movements, and ideas that have shaped African American life from earliest contact between African peoples and Europeans through the late 20th century.

This encyclopedia places the African American experience in the context of the entire African diaspora, with entries organized in sections on African/European contact and enslavement, culture, resistance and identity during enslavement, political activism from the Revolutionary War to Southern emancipation, political activism from Reconstruction to the modern Civil Rights movement, black nationalism and urbanization, and Pan-Africanism and contemporary black America. Based on the latest scholarship and engagingly written, there is no better go-to reference for exploring the history of African Americans and their distinctive impact on American society, politics, business, literature, art, food, clothing, music, language, and technology.

Reviews
“Overall, the Encyclopedia of African American History serves as an outstanding historical reference publication that will add value to any high school, academic, or public library. Moreover, this work will serve to complement any current reference collection covering African-American, Black studies, or cultural studies. In particular, the organization system of the encyclopedia, through its division of entries into themes, distinguishes it from similar reference books.” —Reference Reviews
“This is a valuable reference set, especially for schools looking to add to their collection for International Baccalaureate resources. Recommended.” —Library Media Connection
“More than 200 illustrations, photographs and maps supplement the entries, and each essay also has a bibliography that will allow readers to perform more in-depth research on a given topic.” —Kirkus Reviews
“Overall, this is a soldily written and well-researched mid-level set of reference books on this topic.” —Reference & User Services Quarterly
“Although this work is aimed at high school students and college undergraduates, graduate students and advanced scholars in the fields of American history, African American history, ethnic studies, and black studies will find it an accessible and useful resource.” —Library Journal

Choice Outstanding Academic Title, 2007.
Race riots are the most glaring and contemporary displays of the racial strife running through America’s history. Mostly urban, mostly outside the South, and mostly white-instigated, the number and violence of race riots increased as blacks migrated out of the rural South and into the North and West’s industrialized cities during the early part of the twentieth-century. While most riots have occurred within the past century, the encyclopedia reaches back to colonial history, giving the encyclopedia an unprecedented historical depth. Though white on black violence has been the most common form of racial violence, riots involving other racial and ethnic groups, such as Asians and Hispanics, are also included and examined. Organized A-Z, topics include: notorious riots like the Tulsa Riots of 1921, the Los Angeles Riots of 1965 and 1992; the African-American community’s preparedness and responses to this odious form of mass violence; federal responses to rioting; an examination of the underlying causes of rioting; the reactions of prominent figures such as H. Rap Brown and Martin Luther King, Jr to rioting; and much more.
Reviews
“Essays are well-written and eminently readable, providing a degree of editorial commentary and also using everyday language to keep readers engaged as they make their way through the many dates and names that a concise encyclopedic entry often contains. Of course, some topics are well known, but others are quite obscure, leading one to appreciate the depth of information included here.” —Reference Reviews
“Encyclopedia of American Race Riots is a serious and scholarly work about an aspect of American racial history that commands attention. Editors Rucker and Upton, along with their contributors, provide readers with a reference that is worthy of its topic. It admirably compliments the other titles in this series of references and will be a worthy addition to collections in both academic and public libraries.” —Against the Grain
“Racial violence and the specific phenomenon of the race riot have always been part of the American landscape, but have seldom been covered encyclopedically. Rucker and Upton seek to fill that gap with this outstanding two-volume work, which focuses on American race riots (African American and white) from the Civil War to the present….The body of the work consists of nearly 205 cross-referenced entries written by 80 scholars; each entry concludes with a section of Further Readings. Discussions of specific riots obviously predominate, with expected related entries like the Civil Rights Movement, Martin Luther King, Jr., Lynching, The NAACP, and Al Sharpton well-represented, as are less-expected entries like Black Nadir, Exodusters, Niagara Movement, Radio Free Dixie, and White Capping. Special features include a chronology of American race riots and related events from 1863 through 2005, an impressive compilation of primary source documents, and an extensive bibliography of books, articles, and Web sites. This set is indispensable for academic libraries with a focus on ethnic studies, and is highly recommended for other academic libraries and large public libraries. Essential. Ethnic studies collections supporting upper-level undergraduates through faculty/researchers.” —Choice
“The set’s 265 A-to-Z entries-including information regarding events, individuals, organizations, and movements, and written by 80 contributors-focus on race riots, although, as explained in the introduction, the set’s broader focus is on white-black racially motivated violence. A list of entries begins the set, as well as a handy guide to topics….Most articles are about two pages long, though key topics are given more space (e.g., the desegregation article receives almost eight pages). Articles also contain lists for further reading and include bold-texted cross references. A smattering of black-and-white, half-page images is included. Over 20 relevant primary documents are grouped together at the end of the final volume….Recommended for larger public and academic collections.” —Library Journal
“In addition to detailing examples of collective violence between white and black Americans since the Civil War, including riots, lynchings, vigilantism, assassinations, racist police violence, etc., the 265 entries presented by the editors in this two- volume encyclopedia cover a broad range of related subjects and themes. Among these, broadly speaking, are anti-lynching and civil rights organizations and activists, government organizations and officials, ideologies and policies, legislation and court cases, newspapers and reporting, racist organizations and leaders, literature and art, social issues, and war and the military. The entries, which range in length from 500 to 1000 words each, are cross-referenced and include bibliographical guides to further reading. Also included in the encyclopedia are a chronology; a selection of 23 primary documents; a short essay on the recent historiography of race riots; a subject index; and a bibliography of book, articles, and web sites.” —Reference & Research Book News 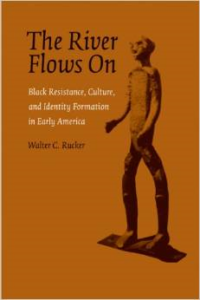 The River Flows On offers an impressively broad examination of slave resistance in America, spanning the colonial and antebellum eras in both the North and South and covering all forms of recalcitrance, from major revolts and rebellions to everyday acts of disobedience. Walter C. Rucker analyzes American slave resistance with a keen understanding of its African influences, tracing the emergence of an African American identity and culture. Rucker points to the shared cultural heritage that facilitated collective action among both African- and American-born slaves, such as the ubiquitous belief in conjure and spiritual forces, the importance of martial dance and the drum, and ideas about the afterlife and transmigration.

Focusing on the role of African cultural and sociopolitical forces, Rucker gives in-depth attention to the 1712 New York City revolt, the 1739 Stono rebellion in South Carolina, the 1741 New York conspiracy, Gabriel ‘s 1800 Richmond slave plot, and Denmark Vesey’s 1822 Charleston scheme. He concludes with Nat Turner’s 1831 revolt in Southampton, Virginia, which bore the marks of both conjure and Christianity, reflecting a new, African American consciousness. With rich evidence drawn from anthropology, archaeology, and religion, The River Flows On is an innovative and convincing study.

Reviews
“Walter Rucker’s book, which examines slave resistance in a variety of revolts in the colonial and early national period, is the first to trace attitudes and actions of the early rebels to African sources…he is able to show that some of the most powerful and effective slave revolts had strong roots in particular African cultures.” —John Thornton, Boston University